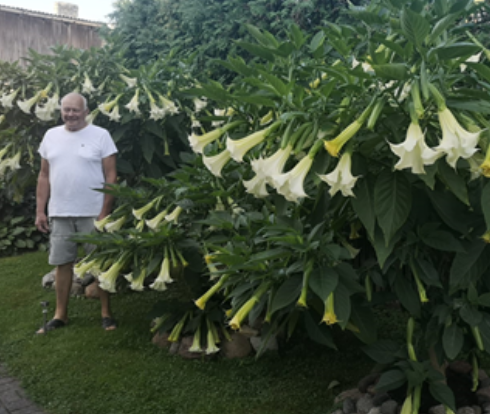 Janis already had a business before: he was an owner of a car service. After retirement and end of his active career life, Janis was searching for a job for some time. One day he saw unusually beautiful plants called “Angel’s Trumpet” while having lunch with his family in an outdoor café. Everyone really liked the way they looked and smelt. “We should try to grow them too!” – said the wife of Janis. His daughter broke off a twig from a plant in the café. Then, they planted it and started the growing process.

At present, Janis grows, selects and propagates these special plants in the form of blooming cuttings in pots. For sale he sorts them by size and age. The entrepreneur has plants with flowers of different colours in his collection: white, yellow and pink. There are two types of flowers: usual ones and double-flowered, which are relatively rare. Janis shares his achievements in a social interest group that unites several “Angel’s Trumpet” specialists, who exchange thoughts and ideas. He loves when customers arrive to him and admire what he does. During personal visits they often buy plants in larger sizes and quantities than was initially planned.

Janis realized that he has nothing to do in winter, because the plants hibernate and do not bring any income during that period. He thought he could do something else and started making sauna brooms. Moreover, he has an idea to create various products out of wood, such as shelves, kitchen boards and hangers.